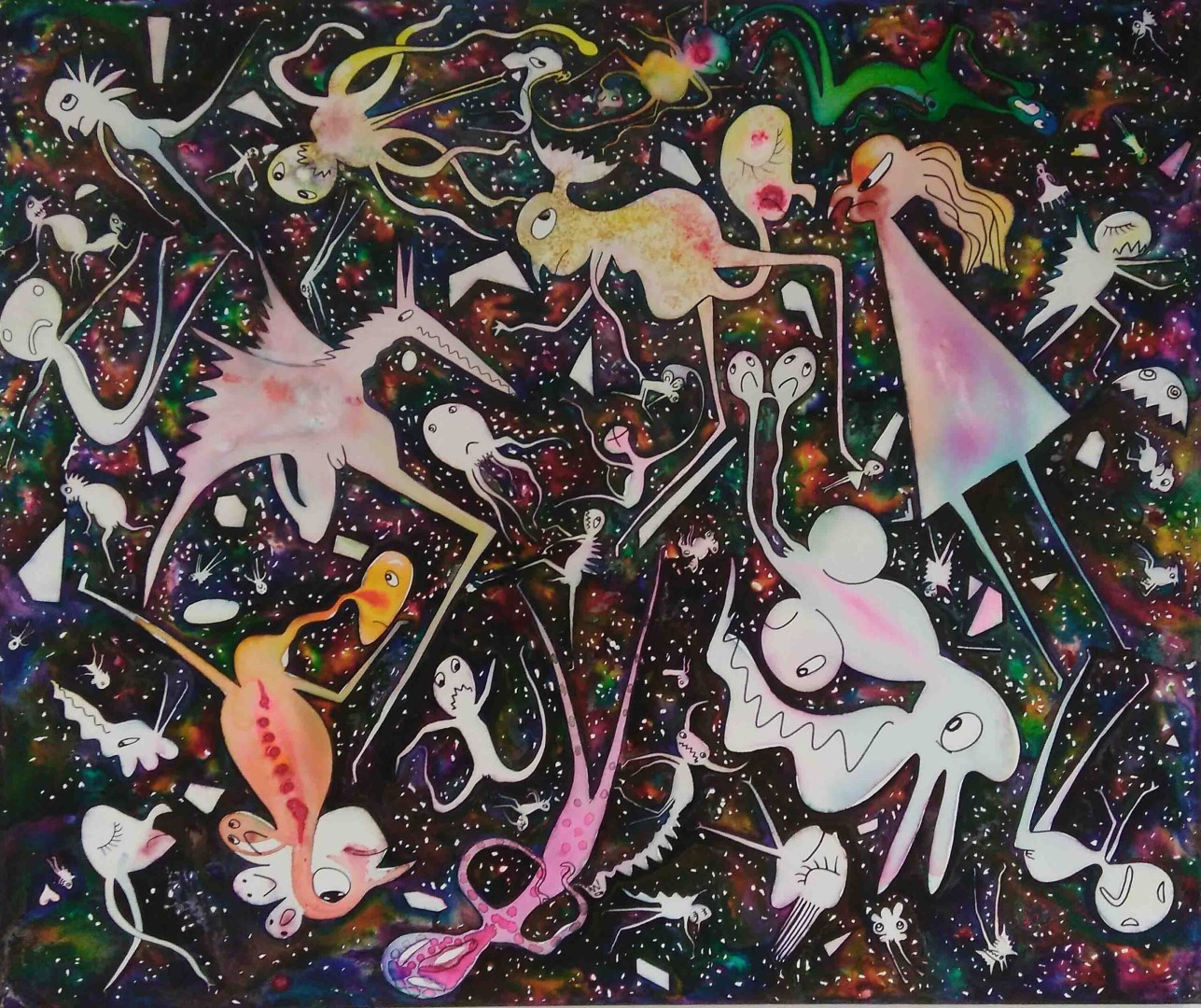 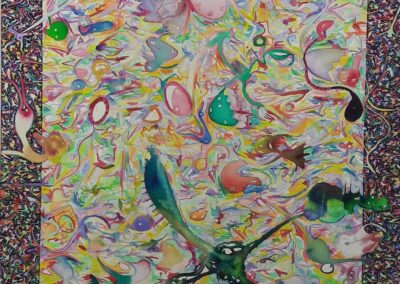 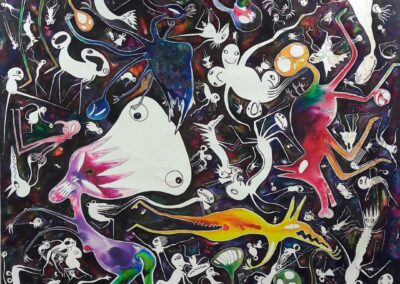 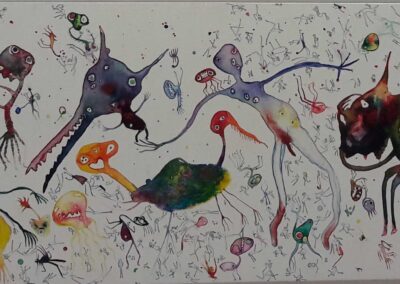 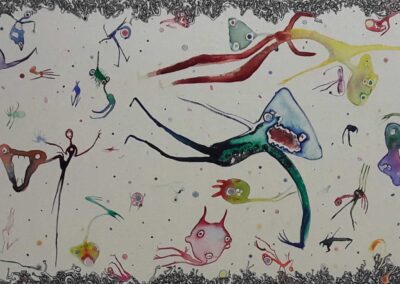 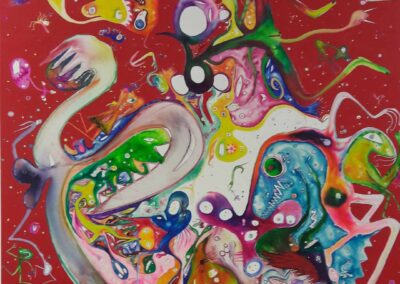 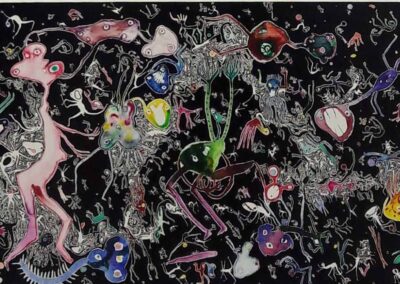 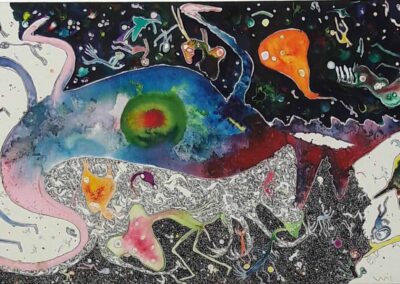 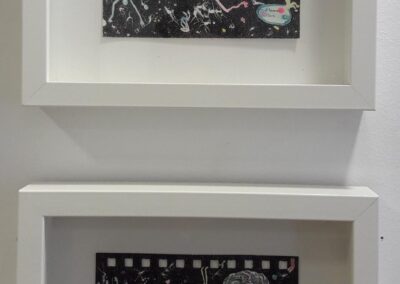 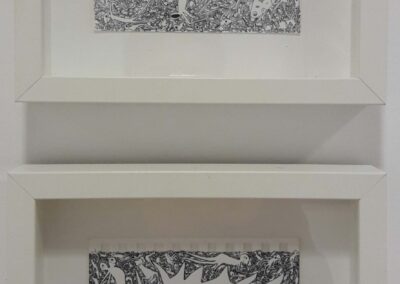 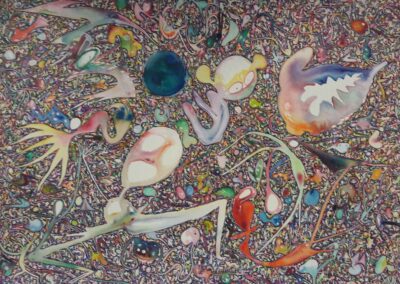 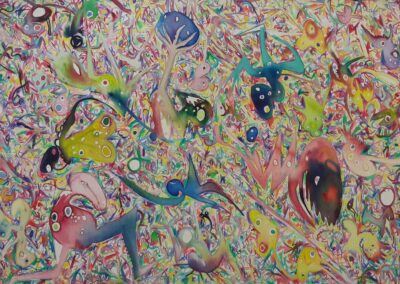 Some overall thoughts about my paintings

It is said that in order to draw, you have to see. But what happens when you’re inclined to draw something out of a world you cannot see? Is it a question of bordering representation and abstraction or is it a reaching point between ourselves and the universe? How can we define its form? By what criteria do we set its limits? How is it influenced by our experience and our environment? And what kind of role do we play in all this? And in the meantime, various figures start to emerge out of nowhere, ideas and thoughts begin to search for their own body and identity, in the amorphous world.

Driven, as I am, by an almost obsessive passion for writing and inclined to write both from my firsthand experience and from a cosmographic point of view, I leap into the microcosm and the macrocosm, into the world of madmen, of capitalists, of erotomanics, of breadwinners, of children and of games. Both representation and narration are abstract. Forms are composed in such a way as to evoke numerous different “readings” that can be narrated in diverse ways, which are never linked to a specific meaning, perhaps more to a Kafkaesque type of meaning, a non-meaning. The exuberant nature of this composition contributes to this, in a catalytic way, providing the spectator with a bottomless source of information, the very quantity of which cannot be readily “digested” by him thus leading to a non-meaning, which in fact reflects an excessively occurring phenomenon in today’s societal reality. It is this very reality that drowns the average man with images of horror, desperation, isolation, wretchedness, mania, depression, hysteria, exploitation, and social castration whilst keeping the ideal of a utopian dream in the distance. The fierce nature of these images inspired me to handle them in a rather humorous-satirical way. First, I satirize my own self and immediate environment, transitioning slowly into social satire; madmen, victims of emasculation, monstrous figures, divine figures, angels, humans with bestial characteristics, avian humanoids, polypi, carcinomas, all play a leading part in an assortment of nonsensical narrations. These scenes are staged on the backbone of a hyper-coloured veil. Τhere, the viewer is able to confront his nightmares, without any kind of raw or cynical imposition on my part, but by allowing him to extract a positive message of triumph over any concerns he may have, a message of optimism and of hope.

The space I’m dealing with is the internal-spiritual, the area of thought, of memory, of imagination, of perception and of intellect. What can be said of the relation between the spatiality of the outside world and the spatiality within me? How do these two connect? The element of space is ontologically fundamental, both the intellectual and the affective must exist somewhere. According to the philosophy of Giordano Bruno, a savant of the late renaissance, internal space, in accordance with the universe, is distinguished by infinity. In fact, it is the only space in which infinity can address all its transparent features as an impetuous universal force, pervading them as they express it. So, infinity, which extends itself endlessly in the universal space, is intensified in the form of the Self, in spiritual space, becoming highly specific everywhere, forming the origin of our passion and freedom. The artist is allowed a priori access into this communication with divine intellect. When he experiences moments of inspiration, he feels as though something is addressing him, as if something is communing with him. It is the very personification of space, the genre of infinity, a god stripped of any religion, cosigning the artist’s every piece of work. Infinity then stirs the images of fantasy in the most unimagined way, and embracing the artist’s idiosyncrasy, is finally exhaled as a specificity. In infinity, I search and record the unspoken, the unwritten, the invisible, the unknown. These elements inseminate the images within me leading to the birth of new images, which in turn give birth to new ideas; ideas giving way to the birth of questions, questions which leave the viewer hanging, with a mere reflection of the daily life which has him trapped in biological, temporal, physical and mental states of being.