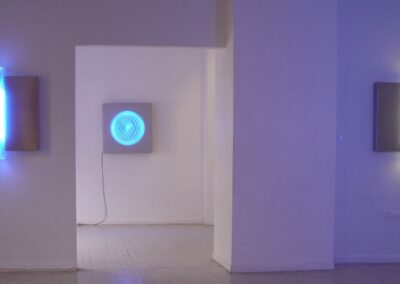 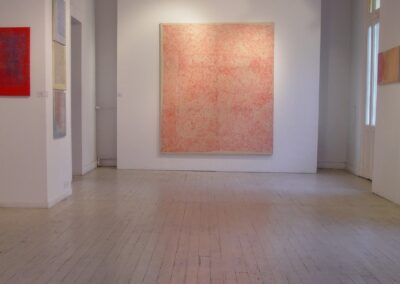 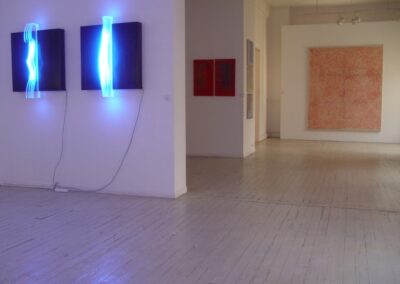 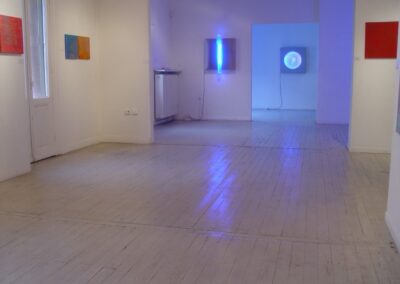 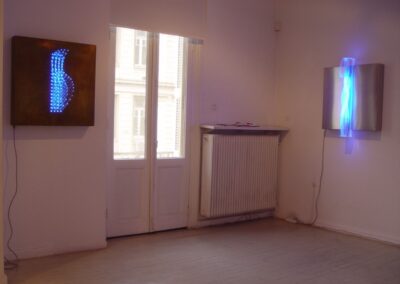 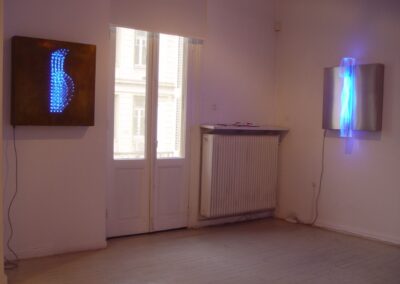 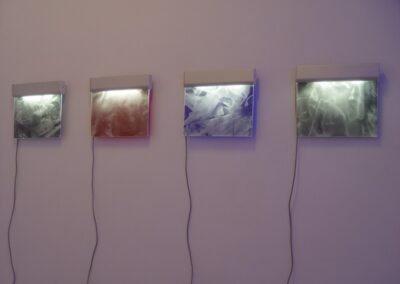 Antonia Papatzanaki is a typical artist of her time. Her meticulously made objects display an acute sense of detail and optical refinement, equal to the high standards set by North American minimalism. The quality of material production and execution in classical vertical and horizontal axes bestow clarity and simplicity on her work, which, however, are misleading, for the work cannot conveniently be part of any school or tendency. Papatzanaki Has been trained in Athens, Vienna and New York and has absorbed the different, if not contrasting, experiences of these cultural capitals while pursuing her own personal itinerary as an artist. Her work oscillates between sculpture and architecture, often simulating the size, format, and positioning of painting: usually being objects of square format, her works are hung or mounted on walls. Yet, their considerable weight and subsequent immobility oblige the viewer to walk around or beside them in order to get a full view. Movement and Light characterize Papatzanaki’s entire work. Nonetheless, it is the use of light, which is so crucial in her entire work that Papatzanaki definitely departs from minimalism. She affixes the lamps behind her background plane while introducing an incision or a perforation on that plane that restricts the light and allows only part of it to emanate. She fills the plane holes with glass rods and covers the slit with Plexiglas slices, thus, creating luminous transparencies, which further refract the light that dashes out. Her lit lines or shapes protrude from the background with an animation that mesmerizes the viewer. Against her austere, background planes, her lit lines and shapes in the foreground, create an important figure-ground tension that determines drastically all of her compositions.

Antonia Papatzanaki, born in Chania, on the island of Crete in Greece, is currently living in New York City. She was educated in Athens, Vienna, and New York where she completed her MFA at Pratt Institute. She is the recipient of many awards and first prizes for public artwork installations. Papatzanaki has exhibited her works in eleven solo exhibitions and many group exhibitions in Europe and the United States. Works by Antonia Papatzanaki are in the Vorres Museum in Athens, the Contemporary Art Center of Rethymnon, in Crete, and in numerous private collections, while several public works are on permanent display throughout Greece. In addition to critical essays that analyze her work in five solo exhibition catalogues, more than one hundred articles and reviews of Antonia Papatzanaki’s works have been published in art periodicals and newspapers in Greece and New York. 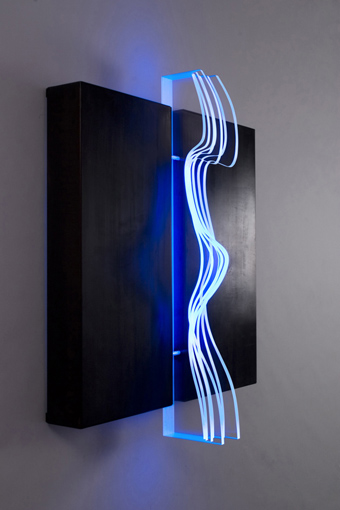 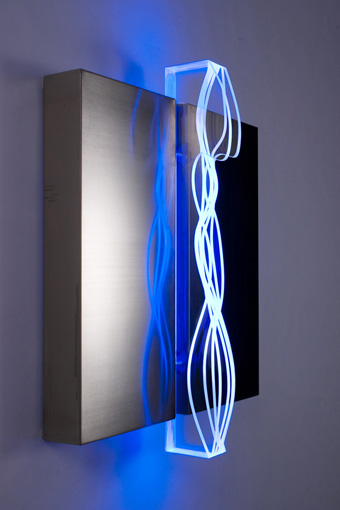 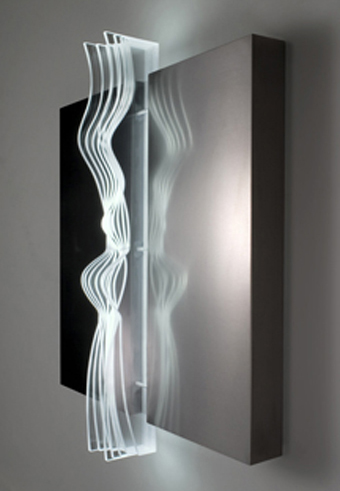 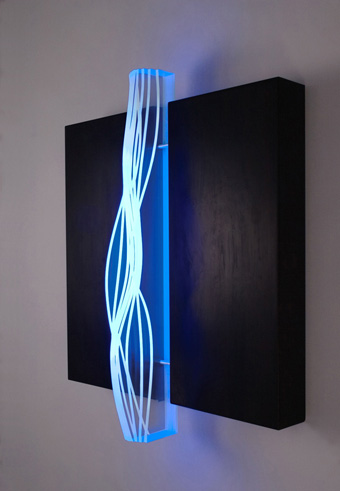 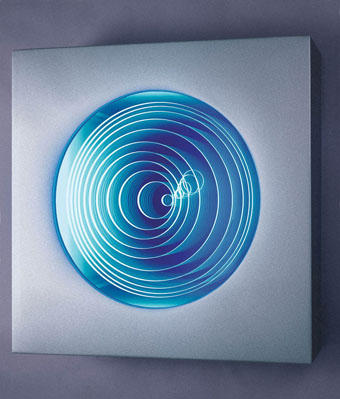 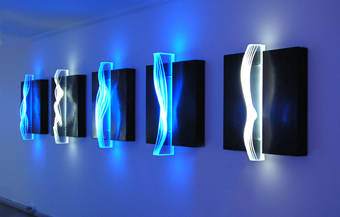 Yiannis Ziogas, in the show at TSATSIS PROJECTS/ARTFORUM, will present paintings from the serie Secret Landscapes of the period 2006 to 2007. The serie Secret Landscapes started in 1996 and continues up to now. The artist has worked in these paintings in the places where he lived during this period: Athens, Saint Constantine (Samos), New York, Chalkis, Mesonisi (Florina). The aim of these works was Yannis Ziogas’ intention to approach the pictorial surface as a field of confession. Small gestures main in a painstakingly manner are repeated and shape conceptual fields. The works are numbered in ascending order recording the time of their completion. The main element is not a small gesture as it seems for the first time. What is important is the conceptual veil that has already preoccupied the artist since 1991 when he wrote the book Byzantine Malevich. ( Stahy, 2000). The process of the conceptual veil is initiated from the layering of various narrations that are finally shaping an active surface. Every surface maintains its autonomy, and simultaneously it is combined with other layers to create a narration. The works that are presented in the exhibition have been painted in Athens and in Mesonisi, Florina.

Yiannis Ziogas was born in Thessaloniki (Greece). He studied Math (BS University of Athens) and received his Master’s in Fine Arts at the School of Visual Arts (1991) in New York; he has held thirteen solo exhibitions and has participated in numerous group exhibitions in Greece and abroad. In 2001, with the support of the J. F. Kotsiopoulos Foundation, he attended the International and Curatorial Program in New York. He teaches painting as a lecturer at the School of Visual Arts in Florina, Greece. His work has been reviewed nationally and internationally (New York Times, Artnews, Sculpture, Giornalle dell’ arte). He is the author of several essays on art theory and of the books The Byzantine Malevich, Tarkofsky in Chalkis, Censorship in Visual Arts. 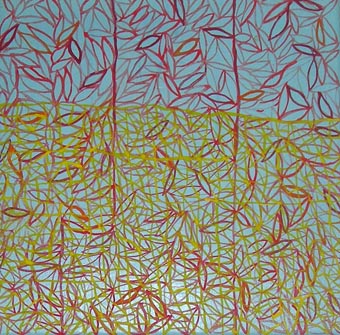 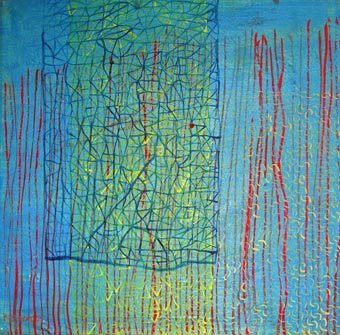 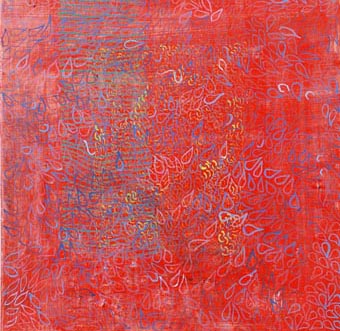 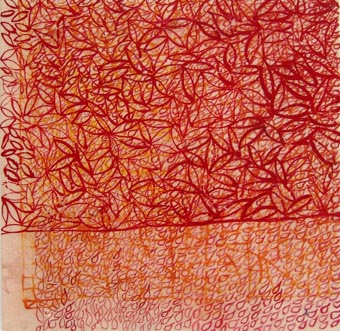